Most regulars at Bon Accord Public Library are good friends with our library dog. You’re probably aware that having a library dog is pretty unique, but did you know that having a furry librarian in itself is actually not that uncommon?
In library tradition, four-pawed library staff are almost always cats, with somewhere between 300 to 809 estimated to exist worldwide. But why cats? To answer that question, we need to go back to the 3rd century BCE.
Location: the Library of Alexandria, Egypt, wherein a librarian named Petsis was stressing over the fact that mice kept damaging his library’s manuscripts. Being unable to find a solution to his pest problem, he decided to go for a walk to clear his head before tackling the issue once again. He wandered the city for a while, but alas, the walk and fresh air did little to help jog his mind for an idea. As he was nearing his place of work, he noticed some of the local stray cats had followed him, which was when the proverbial light bulb went on over his head and the long partnership between libraries and cats began. Ever since then, cats have helped guard libraries all over the world.
Interestingly, to this day, libraries don’t typically choose to adopt a cat; much like the wand chooses the wizard in Harry Potter, the cat typically chooses the library, as you’ll see in the real stories below:
Aptly named Library Cat showed up one day at the University of Edinburgh’s main library and kind of just… stayed.


Kuzya showed up at the entrance to Novorossiysk Library (Russia) in the fall of 2012, and soon won the hearts of staff and patrons alike. He started out having the official title of “pet”, but quickly rose up the ranks to “assistant librarian”, meaning he’s required to look dapper and professional on the job, hence the bow tie.


Dewey Readmore Books, from Spencer Public Library in the US back in the ‘80s and ‘90s, was found in the library’s overnight drop box as a kitten, and the rest, as they say, is history. 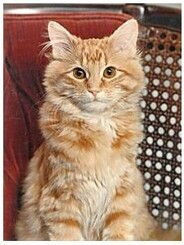 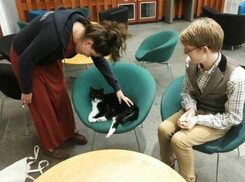