In the three posts in this series, we will be looking at the power of words and the importance of knowledge-sharing by looking at tales featuring three famous knowledge-sharers: Charlotte from E.B. White's Charlotte's Web, Anansi the Spider-Man from West African folklore, and the Norse god Odin.

E.B. White's Charlotte's Web is first and foremost a story about words. It teaches us how incredibly powerful they can be, and how words aone can doom or save a life. The book teaches us by example the importance of words in shaping a story, and how the choice of words made by a writer or character can completely reverse which way the story will go.

It is words that save Wilbur from the dreaded fate that befalls most spring pigs, though it's made very clear in the story that it isn't just words in and of themselves that bring his reprieve. It's the right words and how they're presented. Charlotte reminds us that, the word "crunchy" might fit their need for a short word, but "it'll make Zuckerman want to butcher Wilbur for bacon come Fall", and thus that they do not require just any short word, but rather one with the right connotation to fit their need. As she spins her second web, Charlotte points out that "[she] shouldn't use sticky thread for the letters; if [she does] bugs will get caught on it and ruin the effect", showing Charlotte's awareness that even the right word itself is not enough, as it does not have quite the same impact if it isn't presented properly.

It is therefore not surprising that the book points to the importance of expanding one's vocabulary, and that one should not be afraid to ask when they encounter an unfamiliar term. From the moment she appears, Charlotte begins expanding Wilbur's vocabulary: "Salutations!" she tells him, before cheerfully explaining herself when Wilbur asks her what it means. While it is true that Charlotte is by far the most educated due to being the only one of the barn animals capable of reading and writing, it isn't that skill in itself that makes her wise. Her wisdom comes from her vast vocabulary, which she willingly shares with anyone willing to listen. She demonstrates that the more words one knows the more in-depth one's understanding of the world becomes. When she names off the different parts of her legs Wilbur realizes that there's more to a leg than just a leg, thus furthering his understanding of himself as well as the world. That is not to say that the ability to read and write is any less important, for while other animals (such as the goose and the gander) had a relatively substantial vocabulary they did not have any way to use their knowledge, and therefore were powerless in helping little Wilbur even if they wanted to.

Such is the power of words in Charlotte's Web that even though Wilbur admits he doesn't "feel terrific" before Charlotte spins her second web, he feels terrific after, as if by having written words officially claiming that Wilbur is terrific he becomes terrific even though there wasn't any real change apart from everyone's perception of the little piglet. The same is the case with the fourth and final web - Wilbur looks like an ordinary happy pig, and he even has "a bit of crusted slop behind one ear", but he feels and looks radiant by all accounts. 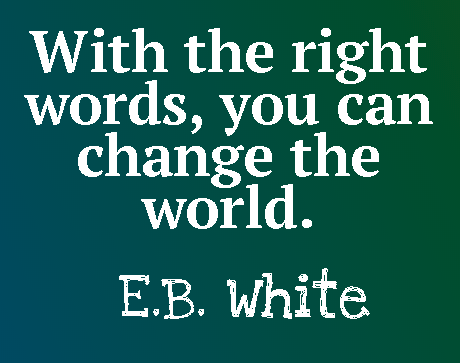