'Tis that time of year again -- Halloween is almost upon us!

Non-Canadians tend to think of it as an American holiday, but its origins are not as American as pop culture would have you believe.

For starters, the holiday originates in Ireland and Scotland by way of the Gaelic festival of Samhain. It was then co-opted by Christians under the name of All Hallow's Evening, as a start to the celebrations of All Saints' Day on November 1 ("hallow" was a word meaning "holy person," making Halloween's original name basically "translate" to All Saints' Evening).

But Halloween as we know it?

That's as Canadian as Mounties and Nanaimo bars, y'all.

The first recorded instance of kids going door to door dressed up and looking for candy in North America is in Ontario in 1911,* still under the original name of the activity we know as trick-or-treating: guising. Back then, early evening was for children to dress up and go guising, with the later part of the night being for the older crowd to go mischief-making and partying.

The earliest recorded use of the now-traditional chorus of squeaky voices chanting "Trick or Treat!" didn't show up until November 3, 1927 in a newspaper for the town of Blackie, Alberta: 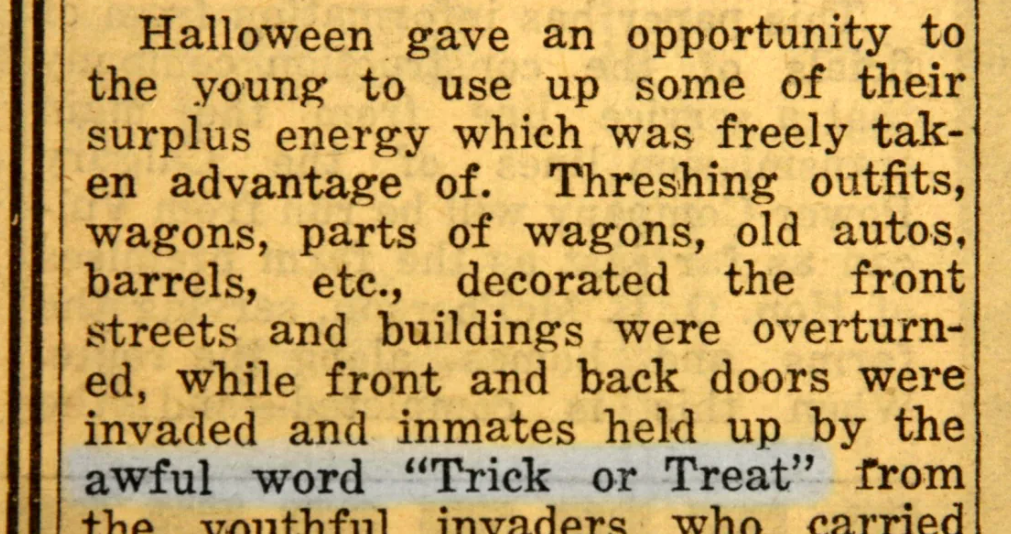 That's right, folks! Time to bring out your Albertan pride: the trick-or-treat chant was created right here in Alberta!

* Source: Halloween: From Pagan Ritual to Party Night by Nicholas Rogers, Chapter 3: "Coming Over: Halloween in North America" on page 76.