Once upon not-so-long-ago, in the mid-1800s and early 1900s, there was a housing crisis in the United States and around the world. The rich minority would buy undeveloped land and housing and lease land and living spaces for exorbitant prices, becoming richer simply by virtue of owning land while the majority of people spent most of their income just to make rent.

As the wealth gap kept widening, people began to put forward alternatives to the then-new industrial capitalism system we have today. Though communism and socialism are by far the most famous proposed replacements that arose during this time, there were a lot more different suggestions floating around. One of those suggested replacements was a socialism-adjacent system called Georgism, which proposed, among other things, a single tax system based on land ownership.

Enter Lizzie Magie, a supporter of Georgism who lived in a town called Arden, which was run using the Georgist economic system (a kind of unofficial pilot project, if you will). In Arden the rent you paid was reflective of the value of the land you lived on and the money they paid the town for their rent was reinvested into the community. Around 1904 Magie created The Landlord’s Game as a way to help demonstrate to the public the problems with a capitalist economic system as well as to demonstrate her preferred proposed alternative.

The Landlord’s Game was really a two-in-one game; it had a double-sided board with each side allowing the players to play according to either Georgist rules or capitalist rules. The premise of the game was simple: you followed a continuous path around the outside edge of the board for a set number of times, with the track being made up of blocks representing properties. You went around buying property, railroads, and utilities, building houses on your land, and in the end whoever had the most money won. Each property featured a name (Broadway, Fifth Avenue, and Wall Street being the most expensive), purchase price, and rental value. 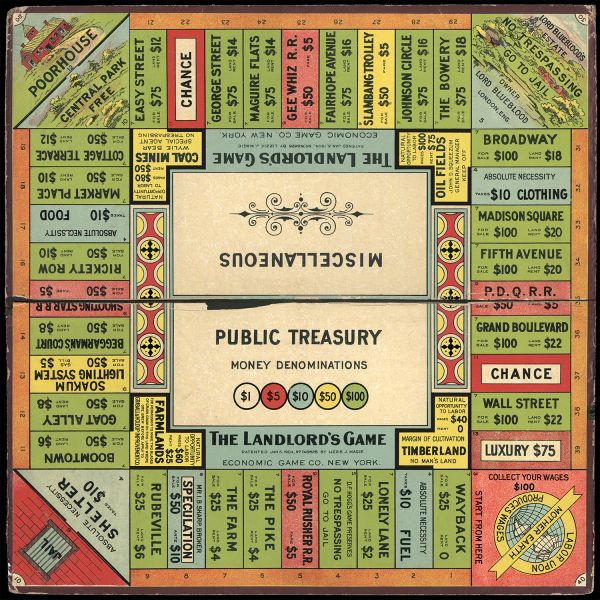 That's because the capitalist side of the board went on to become the game we now know as Monopoly.

Just like it is today, your ultimate goal was to kick other players off the board and form a monopoly. Regardless of whether you had developed the land in your property, anyone who landed on the square had to pay rent. If you couldn’t afford to pay rent, you went to jail or the poorhouse.

On the Georgist side, jail became a free college and the way rent worked changed. Rent due on undeveloped land went to the treasury and players could only make a profit on developed land.

Magie made copies for the game for all the families in Arden, and it was a big hit. Scott Nearing, an economics professor, made a copy for himself with the intention of using it in class to teach students about the effects of rent gouging. Since he didn’t know what the real name of the game was, he called it the Anti-Landlord’s Game, though his students believed a name like Monopoly or Business would be better.

After some struggles with getting the game officially published, Magie went to the Parker Brothers (the biggest game publisher of the time) who turned down her proposal. According to them, it was too political and too complex to ever be profitable. To be fair, they did have a point. The game was political (it was the whole point, after all) and for the standards of the time it was very complex; most games of the time used the exact same “roll the dice and try to get to the end first” play mechanic and the only variation was the theme. They eventually changed their minds, of course, but that’s a story for another post.