When you were a kid, did you ever come across one of those books that had a story on one side, and then when you got to the centerfold you flipped the book over and there was a second story on the other side? Those kinds of books have a special name: reversible books. In the Middle Ages, this kind of bookbinding was rather popular for devotional texts, though nowadays it’s more used for picture books, two-way language dictionaries, and the occasional novels.

The National Library of Sweden has the privilege of housing an extremely unique and rare reversible book from the late 16th century. It’s not its age or the contents found within that make this book rare. What’s special about it isn’t so much what’s in its pages as it is how those pages are kept together.

You see, while nearly all reversible books hold two volumes, this unassuming little German book binds together six. The amount of planning and careful design involved in creating such a marvel truly boggles the mind. 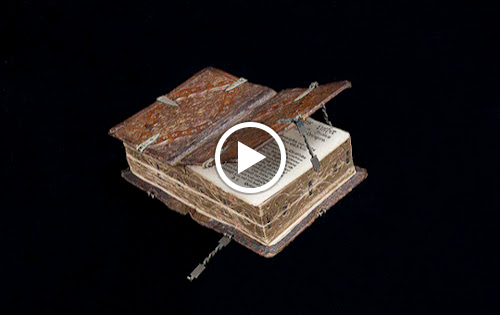 To see detailed still images of the book, click here.